The number of Americans filling for unemployment benefits was 0.742 million in the week ended November 14th, compared to 0.711 million in the previous week, Today’s reading came in above market expectations of 0.707 million. It is the fifth consecutive week with claims below 800k. However today’s reading still remains far above 665,000 filed at the peak of the Great Recession in March 2009.
Continuing claims reading, which lags initial jobless claims data by one week, reach  6.372 million, while analysts expected a drop to 6.47 million. Today’s reading still remain much above 1.7 million average reported before the pandemic. 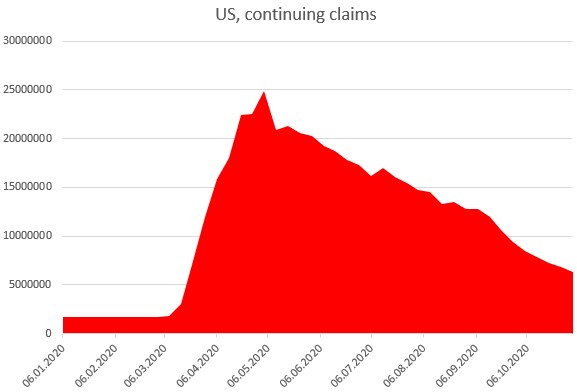 According to the data from 2nd November, continuing jobless claims continued to decline but still remain much above 1.7 million average reported before the pandemic.  However there is an increasing number of emergency pandemic claims that are not included in today's report. Source: Macrobond, XTB

EURUSD bounced off the 1.1840 resistance after today's data releases and is heading towards 1.1816 support level. Source:xStation5
Share:
Back

US markets were closed in observance of Thanksgiving Day AstraZeneca (AZN.UK) reveals dosing mistake in COVID-19 vaccine trial Spread of the COVID-19...

Britvic (BVIC.UK) shares were up over 3% despite the coronavirus pandemic hitting demand. Soft drinks maker which owns brands such as Teisseire, Tango,...

Following a strong BITCOIN rally other “alts” like RIPPLE, DASH or STELLAR saw explosive price gains during the past few days. However, this...