China to aid its economy

Risk sentiment has improved to some extent this morning following the news that China is going to ease the negative impact of the trade war, according to Global Times editor-in-chief Hu Xijin who tweeted Wednesday morning European time. In his tweet he wrote “Based on what I know, China will introduce important measures to ease the negative impact of the trade war. The measures will benefit some companies from both China and the US.” So far, we have not got information what the policies Beijing could implement. This report came some time ago after US and Chinese officials held phone talks earlier this month. Keep in mind that both countries are going to restart their face-to-face negotiations at the beginning of October. This upbeat revelations has pushed the Aussie dollar higher while Chinese equities have also jumped. At the same time, the US 10-year bond yield keeps hovering at around 1.72% this morning after rallying on Tuesday.

Although the above-mentioned report could be considered as positive in terms of risk sentiment, its effect could be somewhat trimmed by another news that China does not include corn, soybeans and pork in its first tariff exemptions list. On the other hand, Beijing does include lubricant base oil, cancer drugs and insect repellent. The exemption is going to take effect from September 17. While key commodities from US exporters’ point of view will not be exempted this time, US farmers may still hope that Beijing will decide to do so in the coming weeks as it wrote in the report that it would keep reviewing applications for tariff exemption and announce other tranches of lists later.

The CHNComp is the best performing Asian index this morning being up more than 1.3% following promising revelations concerning possible steps Beijing may undertake to ease adverse trade war effects. The first major resistance can be localized nearby 11 100 points. Source: xStation5

The jobless rate in South Korea unexpectedly fell to 3.1% in August, down from 4% registered in the prior month, the result turned out to be well above expectations suggesting no change for the month. This is the lowest unemployment since November 2013, and the biggest employment increase (it grew 452k in annual terms) since March 2017. Local analysts point to some base effects as the outcome for August 2018 was particularly bad, however, even after taking account of it, the last month result was really surprising. Moreover, the data also showed the loss in manufacturing jobs eased, which could be a promising bellwether for the export-driven economy at a time when the global manufacturing sectors suffers. 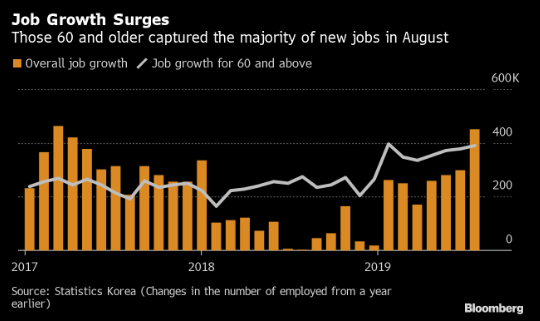