Stock of the week: Apple

- Apple (AAPL.US) held annual product event on Tuesday
- New iPhones to come with a lower price tag
- Lack of 5G compatibility can be seen as a setback
- Apple TV+ service may be a serious rival to Netflix and Disney platforms
- Product presentation was well received causing stock price to jump above resistance zone

Apple (AAPL.US), one of the biggest and best known companies in the world, presented new products and services earlier this week. The annual event is closely watched by investors, critics as well as customers and the company did not disappoint them this time. In this short analysis we will take a look at what Apple has announced this week as well as market reaction of company’s stock. 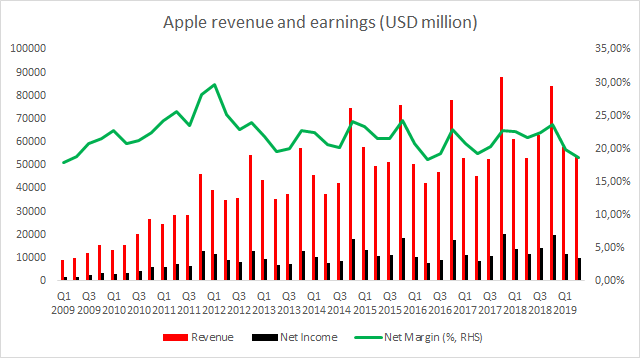 Apple revenue shows strong seasonal pattern with the fourth quarter of the year usually being the best one. Moreover, net margins tend to bottom out in the Q2 therefore the remaining part of the year could see a pick-up in net income. Source: Bloomberg, XTB Research

Apple presented three models of iPhone 11 during the event held on Tuesday in Cupertino, California. The basic version - iPhone 11 - comes with next generation microchips and two cameras on the back. The enhanced version - iPhone Pro - will feature 3 back cameras, extended battery life and will have the ability to shoot videos with all 4 cameras at once (3 back cameras and 1 front camera). The top version - iPhone 11 Max - will have the same features as Pro version but will come with a larger screen. The company seems to have learned the lesson on pricing as the basic version will be offered at $699, down from $749 price tag for last year’s new model. The company decided to make older models more affordable as well. Announced upgrade to iPad was quite surprising as the company rarely presents new tablets during Fall event. Nevertheless, the fact that it was presented prior to the end-year period that is often the busiest one for the company can be seen as a positive. 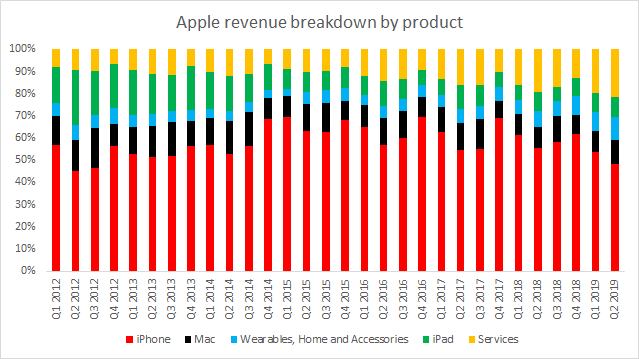 iPhones remain key products for Apple when it comes to revenue generation. Nevertheless, services may gain traction in the quarters to come in case the company upholds competitive pricing on the upcoming video streaming service. Source: Bloomberg, XTB Research

Apart from new smartphones, Apple also presented two new services. Both, Apple Arcade and Apple TV+ were announced earlier this year but barely any details were known until Tuesday. Apple Arcade is a subscription service that will cost $4.99 per month and will feature video games for different platforms developed by Apple. However, Apple TV+ service can be labelled the true highlight of Tuesday’s event. It is a video-on-demand streaming services similar to the ones owned by Netflix or Disney. While it was announced back in March, pricing was unknown until Tuesday. Tim Cook, Apple’s CEO revealed that the subscription will cost just $4.99 per month. To put this figure into context, let's recall that Netflix’s standard subscription costs $13 per month while the one of Disney costs $6.99 per month. Apple TV+ service will be launched in November in over 100 countries while Apple Arcade will be launched in mid-September. 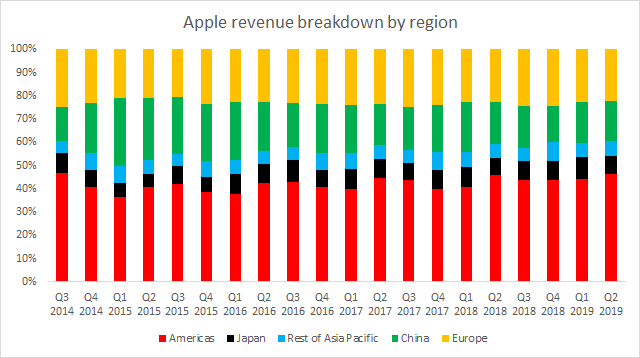 Potential loss of market share in China could have severe consequences for Apple as the country accounts for around 17-18% of total revenue. Source: Bloomberg, XTB Research

It looks like Apple have understood that the strategy of rolling out new products with high price tag each year may not be the best option in the long run. It is hard to deliver a breathtaking product update every year and it is reasonable that people are unwilling to buy virtually the same product 12 months later. Lower pricing may help Apple boost market share, especially as the company tries to incentivize customers by adding 1 year of free Apple TV+ subscription as a bonus to iPhone and iPad purchases. Launch of Apple TV+ can also be seen as a positive as success of Netflix shows that there is a demand for such services and aggressive pricing Apple will offer may help the company secure a solid, recurring cash flow. One thing that may be a setback for Apple is lack of 5G compatibility in its new smartphones. While broad global adoption of 5G is unlikely to happen over the next year, the technology may gain some foothold in Asia, especially China. In such a scenario, Chinese consumers are more likely to turn to smartphones developed by, for example, Samsung as they are already compatible with 5G technology. Nevertheless, it looks almost certain that products Apple will present next year will be 5G compatible therefore this can be viewed as a short-term setback only.

When it comes to the market reaction, price seesawed during the presentation but ultimately ended the day higher. However, solid upward move occurred the following day and the stock managed to break above the 78.6% Fibo level of the decline started in October 2018. Apple shares are trading at 10-month high and less than 5% below the all-time high at around $233 handle. Stock may continue to rally in the days to come not only due to the fact that Tuesday’s product presentation was well received but also because of US tariff delay that should keep market sentiment buoyed. In such a scenario, the area in between $230 and $233 handle - peaks from September and October 2018 - should act as the near-term resistance.