While a tick up in the unemployment rate for the past quarter may lead to some negative headlines, the latest look at the UK labour market continues to show a surprisingly healthy level of strength. The employment rate of 76.1% is the joint-highest on record since records began in 1971 but the best news came on the earnings front. Workers continue to see their real wages rise with the latest figures showing average earnings outstripping inflation, as measured by CPI, for the 10th month in a row. The average earnings for the past quarter in annualised terms came in as expected at 3.7%, up from 3.5% prior which itself had been revised up from 3.4%. Stripping out bonuses the figures were even better with a 3.9% rise, topping forecasts for a 3.8% increase. 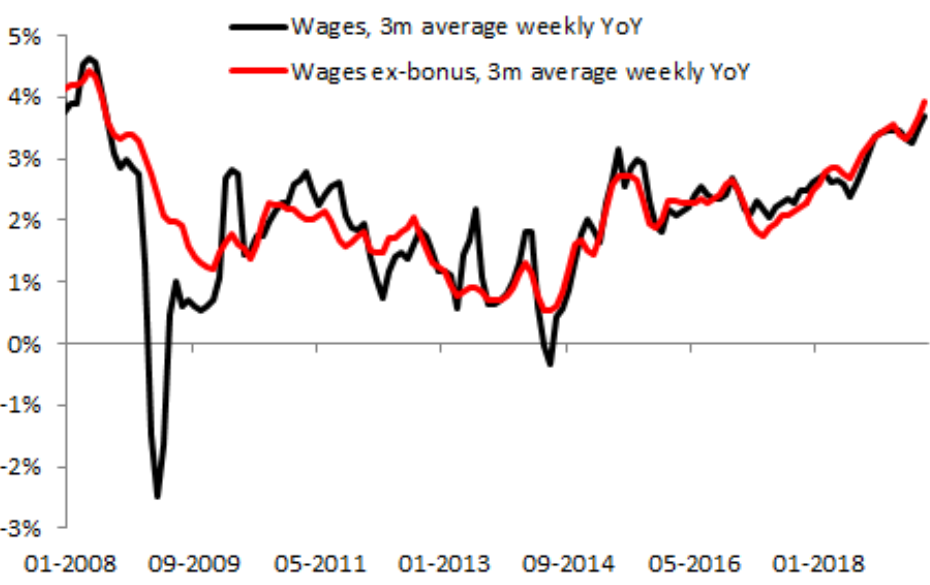 UK wages extended their good run according to the latest release with the pace of growth at its highest level in over a decade. Source: XTB Macrobond

After ending last week with its lowest closing price since 1985 the GBPUSD remains not far from its recent lows and given that employment figures lag, the markets will remain far more interested in the latest developments on the Brexit front. Source: xStation

Speaking of Brexit, there have been a couple public polls published in the past 24 hours that are attracting attention. The most surprising is a ComRes/Telegraph survey that suggests a majority support proroguing parliament to deliver Brexit. This looks like the current strategy of new PM Boris Johnson and not only has it got more than 50% support according to this poll, a whopping 89% of respondents also believe that MPs ignore voters on Brexit. 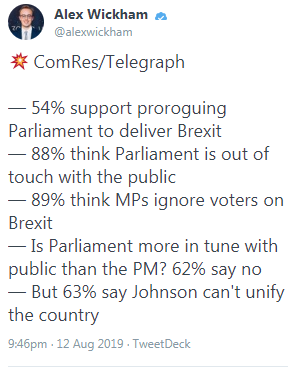 The latest poll suggests that there is a majority for proroguing Parliament to deliver Brexit, a finding that may serve to further embolden PM Johnson’s attempts to pursue this strategy. Source: Twitter

Another survey from Election Maps UK prediction a General Election now would see the following results:

This would give the Conservatives a majority of 5 and while this represents a wafer thin margin still will still come as a pleasant surprise for the party and Boris Johnson.