The latest US jobless claims data has been released at 1:30 pm BST. Report was expected to show initial jobless claims dropping from 845 to 825k. However, actual data showed an increase to 898k. Continuing claims dropped from 11183 to 10018k (exp. 10550k). Simultaneously, 2 regional US indices for October have been released - Philly Fed and New York Empire. Philly Fed showed a drop from 17 to 10.5 (exp. 15) while NY Empire jumped from 15 to 32.3 (exp. 14). On the net basis, data pack can be seen as slightly negative and stock market indices deepened drop following the release. 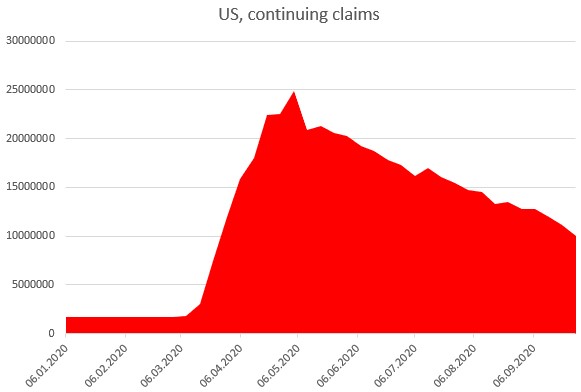 Continuing claims data showed a decline from 11.183 million to 10.018 million. However, one should keep in mind that this data comes with a one-week lag. Source: Macrobond, XTB

Cable surges to a 6-week high

Crude inventories in the US dropped by 1.001 million barrels in the week ended October 16th, following an 3.818 million decline in the previous week and...

Spain will most likely become the first European country to reach 1 million coronavirus cases with the government considering introducing a nighttime curfew...