Stock Market Comment: A look at Tesla and Apple

US tech sector continues to climb but some weakness could have been spotted on drivers of the ongoing rally - Apple and Tesla. Both stocks booked strong gains on Monday during the first session of post-split trading but struggled in the following days. In our Stock Market Comment we take a look at recent news concerning both stocks. 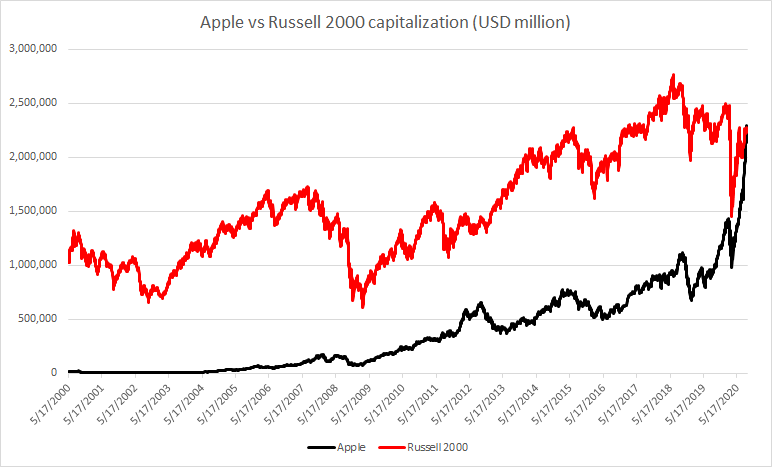 Apple has experienced a strong rally following a drop triggered by coronavirus pandemic in February and March. The stock not only fully recovered from the aforementioned decline but rallied 150% off March's low. High price tag encouraged Apple to perform a stock split and the market rewarded this move with a 4.2% gain on Monday. Stock added to these gains later on and its capitalization exceeded capitalization of all stocks in Russell 2000 index on Tuesday.

Apple gained on Tuesday after reports saying the company asked its suppliers to produce 75 million 5G iPhones for later this year. News signalled that the US tech company does not expect a drop in demand. Having said that, recent weakness could be ascribed to general profit taking and to lesser extent news connected to EU tech tax. Fundamental outlook has been intact.

Apple launched yesterday's trading with a big bullish price gap but ultimately finished the session lower. Nevertheless, as long as the price sits above the lower limit of the Overbalance structure at $127, bulls remain in advantage and uptrend is maintained. Source: xStation5

Tesla gained even more than Apple during the first session of post-split trading. Stock closed 12.5% higher on Monday but started to decline on Tuesday. However, unlike in Apple's case, there was a clear negative catalyst behind the drop. Tesla announced that it will offer new shares worth $5 billion "at the market". While in case of stock split investors retain rights to the same portion of profits (just split among larger amounts of shares), new stock offerings dilute ownership. Tesla shares were trading even 15% lower at one point of Wednesday's session after Baillie Gifford, UK investment firm, said it has reduced its stake at the company from 7.67 to 4.25%.

Share price of Tesla (TSLA.US) cratered yesterday but managed to finish trading off the daily lows. However, the stock is trading 6-7% lower in pre-market trade today. Support to watch can be found at $414. Source: xStation5

However, Tesla shares will be on the watch near the end of this week and at the beginning of the next as it is speculated that S&P Dow Jones indices could announce the addition of Tesla to S&P 500 index. S&P 500 was usually rebalanced on Friday in the middle of September with announcement coming 2 weeks earlier. Hence the announcement on Friday, September 4 cannot be ruled out. Announcement could create additional demand for Tesla shares from index funds and ETFs as they will adjust portfolios to better reflect broad market performance.

In spite of a mixed performance of its star members - Apple and Tesla - Nasdaq (US100) managed to close at yet another record high yesterday. Weakness can be spotted today but given recent parabolic rise, it should not be seen as a warning sign. Troubles could start once a stock breaks below psychological 12,000 pts handle that also marks the lower limit of Overbalance structure. Source: xStation5

EUR/USD remains stuck in a range

Today's session is relatively calm on the forex market. The main pair continues to be range-traded and below Fibonacci levels marked by 61.8%. However,...

EUR/USD remains stuck in a range

Today's session is relatively calm on the forex market. The main pair continues to be range-traded and below Fibonacci levels marked by 61.8%. However,...

Shares of Gamestop (GME.US) and AMC Entertainment (AMC.US) today rebounded from the recent period of 'slow' trading, while Bed Bath Beyond (BBBY.US)...