Tesla: What have we learned from Q3 earnings report?

Tesla reported third quarter earnings on Wednesday after the end of the Wall Street session. Stock jumped in the after-hours trading as release showed the fifth profitable quarter in a row. US electric vehicles manufacturer also confirmed its full-year guidance. Take a look at our market alert and find out about the details!

Tesla managed to generate $809 million in Q3 net income. Adjustment for a stock-based compensation leaves Tesla with a net income of $331 million. This figure came slightly below the median estimate of $394 million. Adjusted EPS of $0.76 was higher than expected $0.57. It has marked the fifth straight profitable quarter for Tesla, showing that the company is no longer the cash-burning machine it used to be. Cash at hand increased by $5.9 billion during the quarter and the company achieved positive free cash flow of $1.4 billion. 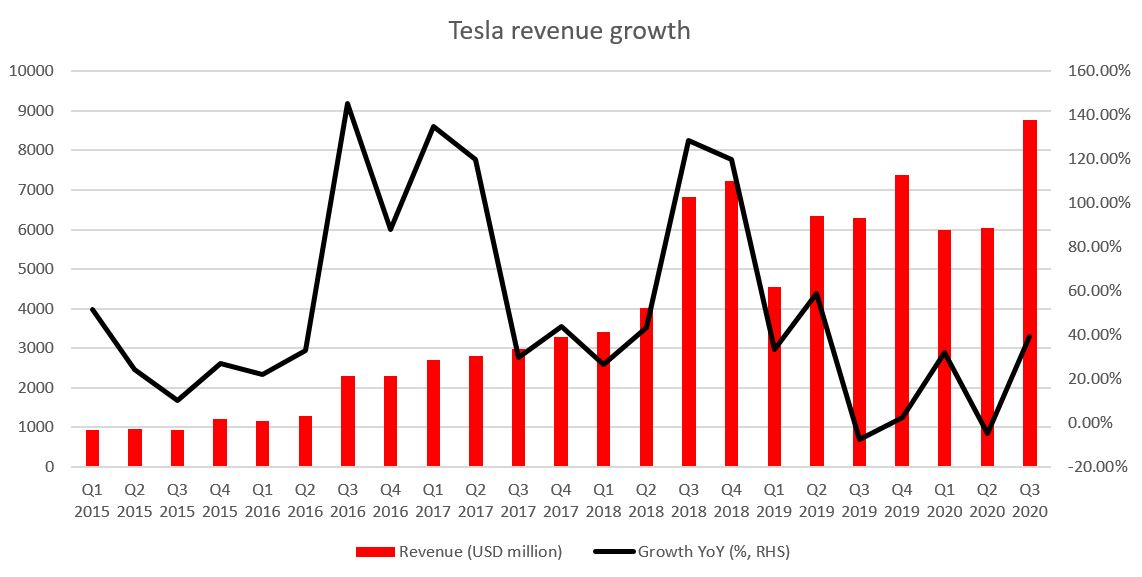 Tesla also managed to generate record quarterly revenue as deliveries reached record. The US electric vehicle manufacturer generated $8.77 billion (exp. $8.36 billion) as quarterly deliveries jumped to 139,300 vehicles. Deliveries increased 44% year-over-year while revenue was 39% YoY higher. Not only deliveries hit a new record but the company also managed to produce a record number of vehicles in the quarter (145,000) as production lines were launched. Tesla confirmed its full-year target of delivering half a million vehicles this year in spite of a risk of new lockdowns hitting demand. Moreover, asked about next-year's goal, Elon Musk said that deliveries are aimed to be in the vicinity of maximum production capacity (840,000 - 1,000,000 vehicles).

Both deliveries and production was at a record level in Q3 2020. However, it was the first Q3 since 2016 when inventory increased instead of shrinking. Source: Bloomberg, XTB

However, not everything is as rosy as it seems. Tesla has once again managed to get an enormous amount of money from sales of regulatory credits - $397 million in Q3 2020. Regulatory credits are given out to the US carmakers for free and they are required to have a certain level of them at the end of the year. This level is dependent on how much electric and conventional vehicles they produce. As Tesla produces only electric vehicles, it has a surplus of credits and sells them regularly to companies that have less EVs in their mix. Comparing $397 million from credit sales with $331 million in adjusted net income shows that automotive production at Tesla is still losing money. Tesla managed to generate $451 million in adjusted net income in Q1-Q3 2020 while making $1.18 billion profit from credit sales in the same period.

Tesla has pulled back after painting at double top near $460 handle. Stock has been sliding towards the $400 area this week, where 23.6% retracement and upward trendline can be found. However, solid Q3 revenue beat may help bulls halt declines and look towards $460 once again. Source: xStation5

Gap (GPS.US) shares surged more than 7% following an upgrade from JP Morgan (JPM.US) to an Overweight rating on what it sees as a favorable risk-reward...

📉Gold about to break key support!

The stronger than expected Markit manufacturing PMI data (preliminary) for November, has goosed the US dollar higher which negatively affected the price...