It’s been a fairly steady week for US stocks but unless there’s a decent move higher this afternoon the major benchmarks are on track to end their recent winning streak. The Dow Jones Industrial Average has posted green closes in each of the past 4 weeks, but this run is under threat with the market trading around 150 points lower than where it ended last Friday ahead of the cash session.

A slight souring of the tone as far as trade talks are concerned has weighed on US stocks a little this week and while the declines have been relatively small and measured the Dow is still currently on track to end it’s run of weekly gains. Source: xStation

Later on we get the US flash manufacturing and Service PMIs for the current month in what is the main economic data release left before the week is out. The consensus forecast calls for 51.5 after 51.3 prior for manufacturing and 51.2 from 50.6 last time out for services. In the past hour we’ve also had some market moving data from Canada with the latest look at consumer spending delivering some pleasing signs. For the month of September the figures were as follows:

While these are better than expected, and look even more favourable once the prior revisions are taken into account it is worth noting that the decline is the first in 3 months. 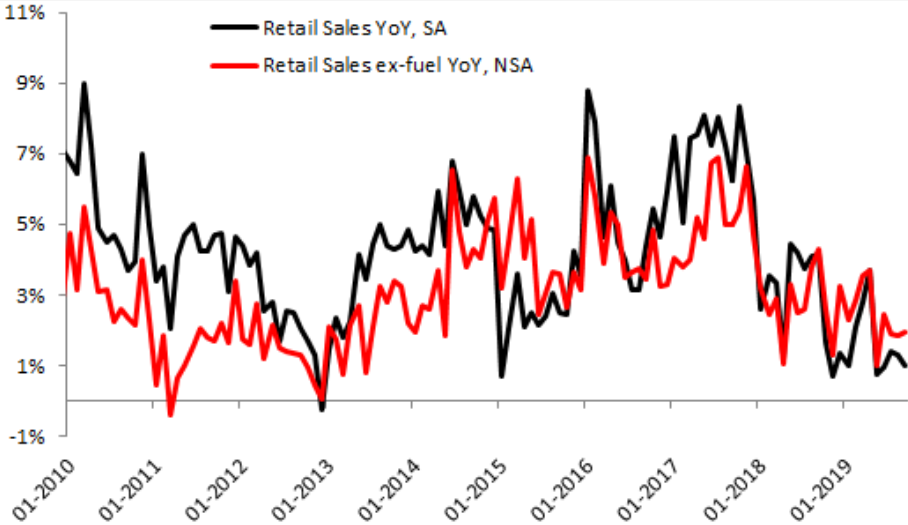 In year-on-year terms the retail sales readings are pretty flat and towards the lower end of the range seen over the past decade. Source: XTB Macrobond

USDCAD has been eventful of late with dovish then not so dovish messages from BOC deputy Wilkins and BOC Governor Poloz causing clear moves in the market. The Canadian dollar has gained in recent trade after the release of the retail sales release although the appreciation has been pared back somewhat after the initial move. Source: xStation

• Second day of the Eurogroup and Ecofin meeting • Canadian employment figures expected to rebound in June There is not much data scheduled...

Oil prices are moving down for a second day on concerning COVID data both from the US and Asia. The US saw number of new daily cases rise above 60k for...