• The total number of confirmed coronavirus cases surpassed 5.94 million of which more than 362 000 died and over 2.6 million recovered.
• US remain the epicenter of the disease with over 1.74 million cases. Brazil is now the second worst-hit country, with  over 414 000 registered cases. 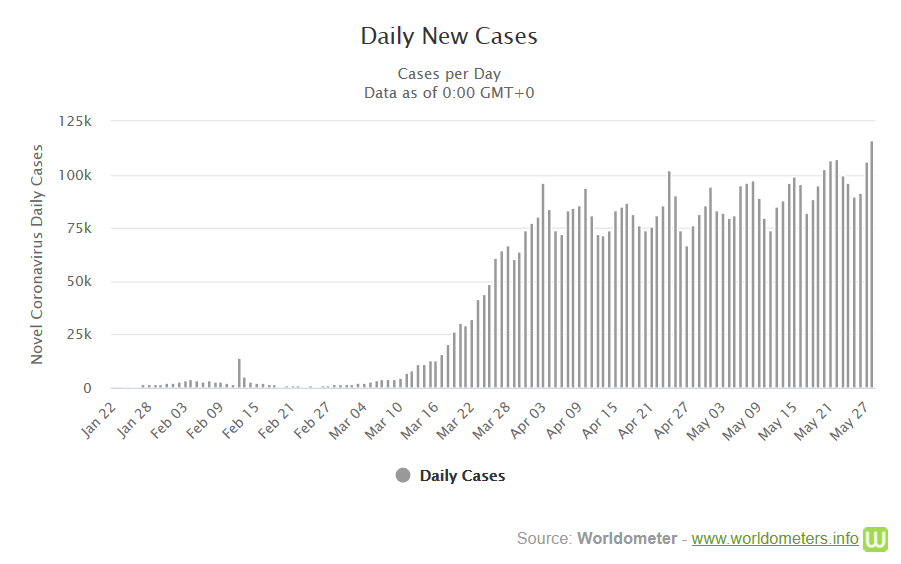 Over 116 thousand new cases were reported yesterday. This is the highest daily count since the pandemic started. Meanwhile 7-day average which currently stands at 101 196. Source: Worldometers
• Brazil reported a daily record of 26,417 new coronavirus cases on Thursday, according to the Health Ministry.
• On Wednesday, Mexico reported a record number of new daily infections, 3,463. Without widespread testing, the government cannot accurately forecast when the virus will peak, said Jose Narro, Mexico's health minister from 2016 to 2018. Meanwhile , deputy health minister Hugo Lopez-Gatell said on Tuesday, that transmissions should start easing in Mexico City, the main hotspot, next week.
• The number of coronavirus infections in France jumped on the same day the government announced an easing of lockdown rules, but the increase reflected the inclusion of new data rather than a rise in daily infections, the Health Ministry said. The inclusion of data from a new tracking system boosted the number of confirmed coronavirus cases by 3,325 to 149,071, the biggest increase since a 4,183 increase on May 6. However on Wednesday, the number of confirmed cases rose by 191, or 0.1%, to 145,555, a lower daily rate of increase than the 0.2% average seen the previous seven days. 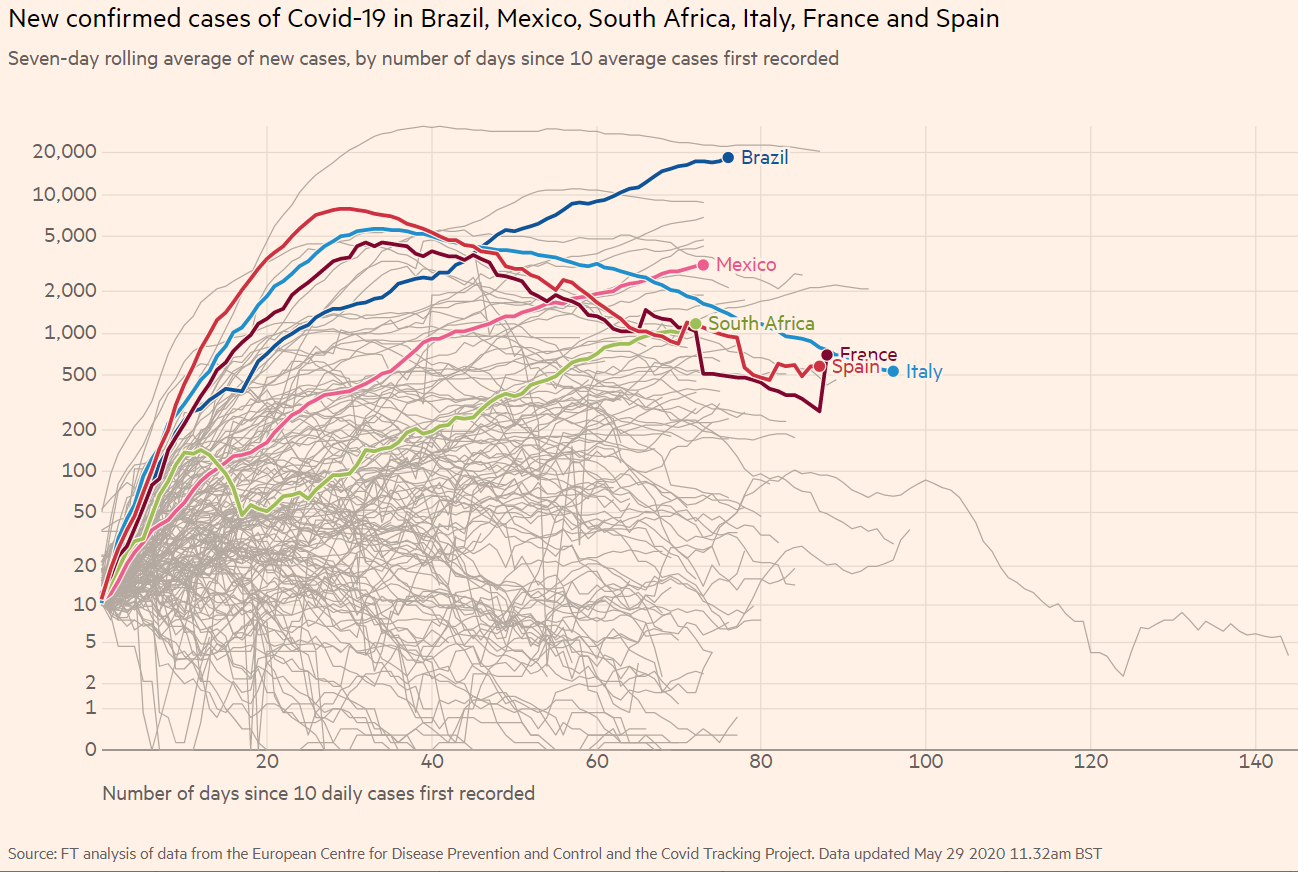 While cases are declining in Europe they are still increasing in Africa, Central and South America. Source: Financial Times
• The US is the country with more deaths caused by the virus with over 100 thousand, followed by the UK, Italy, France and Spain. 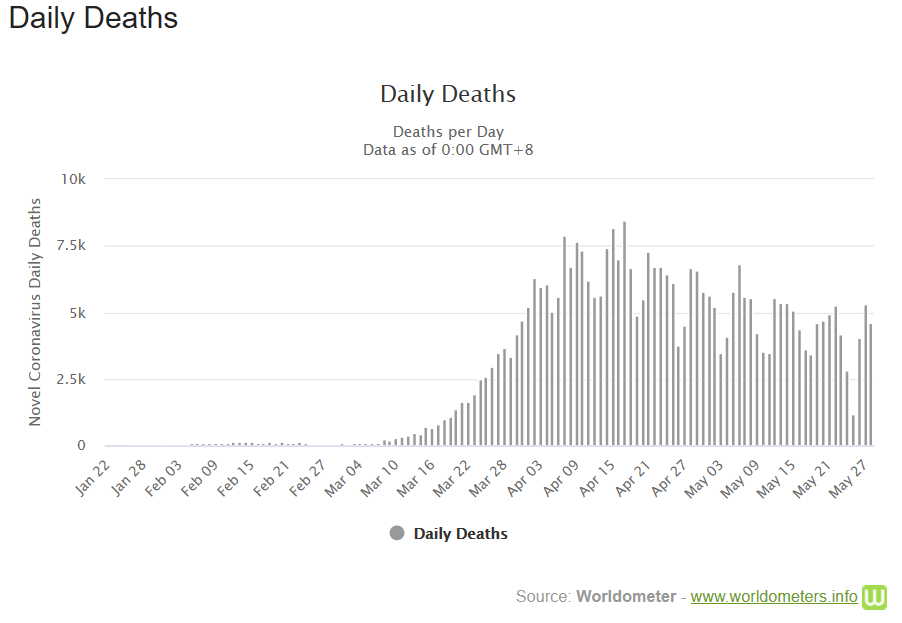 Yesterday 4612 people have died due to coronavirus. Thursday’s figure came in above 7-day average, which  currently stands at 3911. Source: Worldometers
• French Health Ministry said the virus' total death toll rose by 66, or 0.2%, to 28,662, the same increase as on Wednesday and the eighth day that the number of deaths remained below 100. In the first half of April, France reported over 1,000 deaths per day on several days, with a peak of 1,438 on April 15.
• Deaths from the COVID-19 epidemic in Italy climbed by 70 on Thursday, against 117 the day before, the Civil Protection Agency said, while the daily tally of new cases edged up to 593 from 584 on Wednesday.
• Spain's Health Ministry said recorded deaths from the coronavirus reached 27,119 on Thursday, rising by just one for the second day in a row as authorities fine-tune a new methodology for logging cases and deaths. Just 38 deaths were reported over the last seven days, while a total of 237,906 diagnosed cases have been detected since the beginning of the outbreak, the ministry's figures showed. The government has warned the data may fluctuate in coming days as it adjusts to the new methodology.
• Brazil's death toll rose 1,156 from a day earlier to 26,754 confirmed fatalities from the COVID-19, just shy of a record 1,188 deaths registered on May 21. 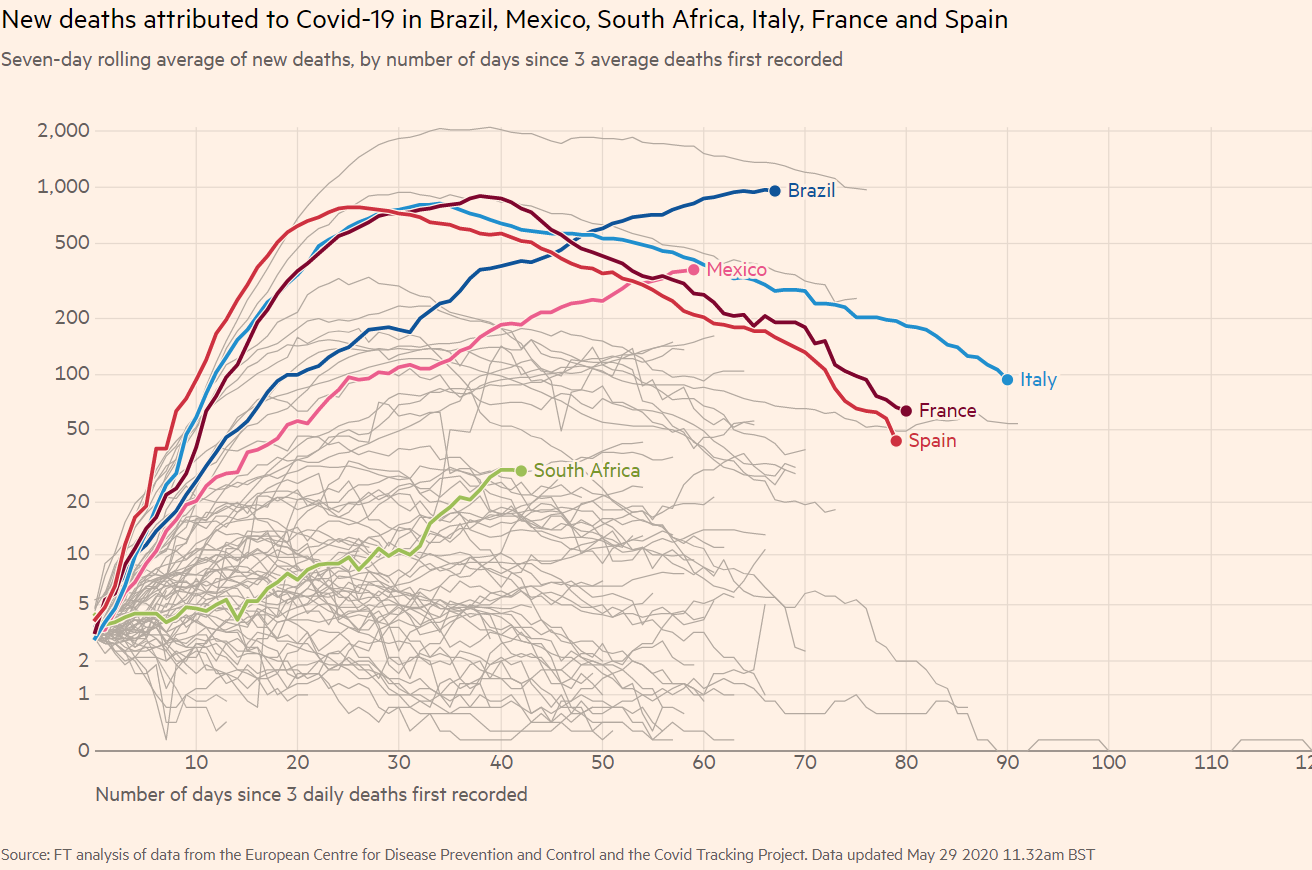